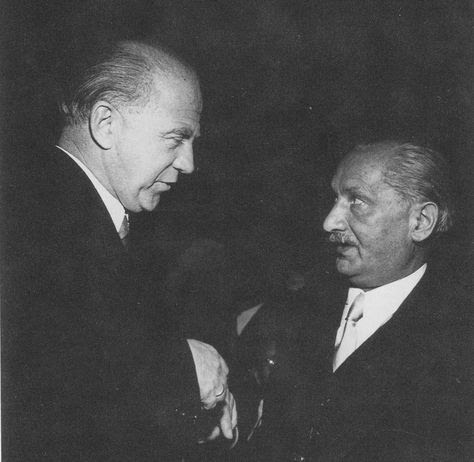 Heidegger claims that Husserl thinks, for in thinking all is thinking, in what follows when philosophy ends, there is only grasping what has been thought, on the basis of an “analogy” on sense data. This means that first the Greeks pour into the being that is Dasein the thought of action. Action is what acts on the things. So that the eyes act on the colors that are the surface of the things. If this action acts, it acts on what is acted on. And the action of the senses (which at the end of Philosophy are gathered around what is most cogent for our natural Dasein, namely touch, “corpuscularity”, solidity, up which, the crooked monster Schopenhauer says “all the senses refer to touch.” and this natural Dasein is what does not yet raise its eyes to Dasein. Which is not a clear saying except that it means, which has not yet lived these 24 centuries and seen to our own time what is seen in Husserl and Heidegger [though not fully accepted in Strauss. And, perhaps, utterly rejected in Heisenberg.]) act on what is. Thus what is come to sight as what is sighted by the activity of the senses. So, in coming to sight, the colors that mark the surface of all things seen, are said to be conscious. Thus, available to the activity of the being that acts with its senses.
So, what Heidegger says is that Husserl still retains a part of the notion of the Metaphysic of availability. Availability to the being that acts. The color that marks the surface of some thing. Thus, that which bound the thing as its “surface.” But, if one has only the surface, it is not sufficient to the reality. Reality mean the basis from which knowledge might spring. Reality, however, is still held to in Heidegger, because Heidegger says Dasein is that world sharing being which has the world that the other Dasein have.
It is not necessary in thinking beings, then to think surfaces. Heidegger then says, the colour is as much being as the being that is supposed to be the being (substance) of the coloured being.
What exercises us, though, is this: Is such analysis under the “guiding aim” of Phenomenology that performs the ultimate doubt? How is this thought? Is the whole of the analysis under the doubt, or, only the phenomena? The phenomena names the whole of our beings, everything.
When Heidegger denies consciousness in the sense of what first glimpses the color of a thing, he posits. Does he posit within phenomenological doubt? This is the genetic circle.
Here, there is something that comes to light, anything at all, the whole of what we know, everything. This is phenomena. Then it is said, already, being of the kind to sit, we are sitters. As though something were set back behind the phenomena. Or, already, before the house which is for dwelling, we are dwellers. we make houses, because we already wanted to live there, because we are the kind of beings that are like that. what does a beetle care for living in a house? It is no dweller. The “opening” is not mere “space” in the sense of dimension. Or, a place where there can be dimensions. Rather, it is what is ready to receive the one that is open. when something is there in the “open” it is then, only then, conscious.
However, does Heidegger than, from within the possibility of the Phenomenology, posit? What is open is itself full of content only in its fullness as what come to be grasped. And then the content is “ontic.” The prior ground is firing outside presence. So it is not available to conscious.
Now we see what is in question: Where is this Phenomena, and where is this posting as mere posting. Both positive and phenomena are phenomena of an absolute doubt.

Posted by epistemeratio at 7:37 PM