Retreat to the inmost. 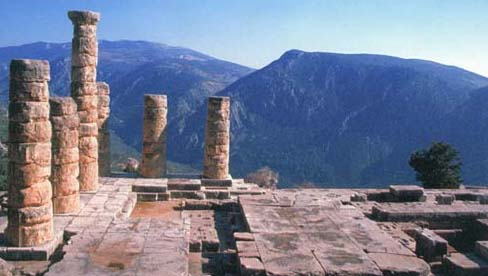 What could be more obvious than that man transposes the way he comprehends things in statements
into the structure of the thing itself? Yet this view, apparently critical but in reality overly hasty, has first
to explain how the transposition of the sentence structure into the thing could be possible without the
thing first becoming visible. The issue as to what comes first and provides the standard, the
structure of the sentence or that of the thing, remains, to this day, undecided. It may even be
doubted whether, in this form, it is capable of a decision.

What is there as the spontaneous ground of the bare word is for the early Greeks taken up as
what is unconcealed and not as what is reveliable. The phenomena. The revelability of a thing,
by contrast, means what can be inferred out of the thing. Revelability is Christian thinking of what
for the Greeks was not yet perfected, the sharing with, and entering into contemplation of things
in active contemplation that comes to be in the way of what it rests in. Revelability is reception,
and in Kant this becomes the “legislation” of the thing by the transcendental power. The throwing off of
the movement of this metaphysics takes the form of, on the one side, the fact value distinction, which obviates the
possibility of questioning in the universities, and, on the other hand, the general existentialism
which holds with a romantic notion of the meaninglessness of the interpretation of all
things which is always essentially credited with a unimportance before hand. This thinking then
is a devious journey beset by the devastation of the human being: on the one side the biological
interpretation: the cheep gathering of mere facts about what behaviour shows up which never grasps
the decisive lack in such an approach. Instead, what arises is a asymptotic endeavor to raise
“values” from the “facts”, which is already set aside as a possibility before the attempt is made
(especially in a kind of bare fantasy of wiling it so because it, in exorbitant researches,
"must be", which corresponds to the sincerity of the strenuous contestation over ideologies).

On the other hand, the theological interpretation of man has utterly given way to the spirit of the
“development of doctrine,” under the notion of the radical weakness of the “flesh of human weakness”
in the light of the text which is written in human language (cf. Pius XI). The entire project to raise a living goal, a
way to the eros as what draws towards the Sacred Heart, repudiates itself in disintegration. The
philosophical interpretation (meaning, so far as the rare cases where philosophy is
taken seriously exist at all, for instance in Strauss, and not in philophy as it stands
as "Analytic," which is mere slavish subordination to and inmost essential dependence
on the European Science) of man wanes in the backward look at the early thinkers,
so far as they are taken up as models to teach what “genuine philosophy” is. What the first “raising of the eyes”
of the human being says is: from here the rest is posited. For instance, there is no such thing as a
bare biological being, there is rather, a human life, from within, that posits an account of a bare biological
account as a sculpture cut from its own block. The “animal,” likewise serves such a function in the
pseudo-thinking of such derivations of the meaning of “human being” as what is or is not “animal being.”

Here we move into a ground where the taking up of the thinking must remain in touch with the
question of time as seen at the End of Metaphysics where it appears most sharply. When bare
phenomena can be set out alongside the fully developed metaphysics of presence, as what is
sheer accident or individualized things thought as under the mathematical unity of a whole which
is in each part what belongs together because each part is the same in its reality as what can be
measured, the strongest form of presence shows itself in that which is not present as accident,
but is the support of the spontaneous whole. At the same time the thinking sees what is
phenomenal, as what is sheer coming forth of itself as what it is in each case, as what already
is itself and is not there for the sake of being revealed. Aristotle still speaks of the pleasure of
just seeing, in the sense not of a taking pleasure from the thing, but of the beholding of the
flow of the stream with the flash of light on its contour and the “light of the sun” as what is sweet
as the sweetness of just being. This is already a kind of corruption of the primordiality of
unconcealment in the dawning of presence. Here, then, in what follows, even the mere “because”
which is prior to the thinking of all “possibility” is set aside as a place holder out of the mystical
thought of a period closer to our own. Instead what is sought is an abandonment of the claim to
the necessity to make something pay man. This is vexed in the look back so far as the seeking
implies what is thought in the radical question. Suffice it to say, such searching is wholly impossible
under the general mucking about of the opinion of human beings and the vagaries of what doesn’t
even see the transformation of the pre-science or pre-philosophy in the first theorizing. The
insinuation of this reflective theorizing into the habitual dealings with the world describes the
transformation of phenomena into raw material for exploitation by the European Science.
The collective malaise which sees nothing to overcome is what is to be overcome in the
withdrawal from the general opinion’s menacing decision which is towards power, as gladiatorial
contestation over the ratcheting up of cybernetic methods of thoroughly subduing the earth
and everything on it. These manipulations which constitute the quiet and tranquil motions of an
animal in a pot with the heat rising, which grows ever more comfortable, according to Kant’s
joke about the  patient who died form the cure in historial terms: in the sense of the rising up of
presence out of the First Beginning. This withdrawal from publicness can only mean a making
of atonement to what is let slip by in the glance of historicism: in seeing the moment of the
region of questioning in this withdrawal of the phenomena.

The question of what “remains” “undecided” in the language should not think that the seeking
of the primordial is a end in itself, rather it aims at aiding in the thinking of time. Time is no longer
thought in the sense of “reality,” as the finest line of decimals in the measurement
(cf. The Mighty Richard Feynman),  or as what is merely the romantic grasping of the
whole by this or that opinion of an existentialist “subjectivity” here or there. Time can not be given
to the regions of a pre-unfolded reflection out of the Greek Beginning.
Posted by epistemeratio at 4:08 PM