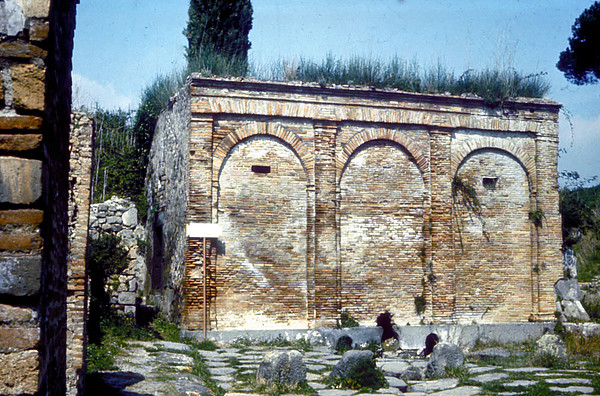 The stone on the path is a thing, as is the clod of earth in the field. The jug is a thing, and the well
beside the path. But what should we say about the milk in the jug and the water in the well? These,
too, are things, if the cloud in the sky and the thistle in the field, if the leaf on the autumn wind and
the hawk over the wood are properly called things. All these must indeed be called things, even
though we also apply the term to that which, unlike the above, fails to show itself, fails to appear.
One such thing which does not, itself, appear- a "thing in itself'' in other words- is, according to
Kant, the world as a totality. Another such example is God himself. Things in themselves and
things that appear, every being that in any way exists, count, in the language of philosophy, as
"things."

The onto-theological here (in the work with the name Heidegger, in detail in the mention of "God himself")
means that Deus is not a cause (can no longer be thought so simplicter when appropriated by the work).
It won’t do to point to Thomas in order to say that Deus is already a mystery. According to the theological account, which takes over
metaphysics and wends it into a coming-to-ever-richer-expression of every thinking that was
in the midst of the Church Fathers with Aristotle as what assimilates and deepens, Deus makes
the stars, Deus makes the sun. Those who worship the stars, and they who worship the sun,
them who exalt in the gods, and they who rejoice in what is holy, serve what Deus makes.
To be sure, in Aristotle nothing is created, the primordial material is held in place by Zeus (the
tugofwar with the Gods is a kind of Muthos of causality which is no causality, neither mere "because"),
who becomes Deus only in the fusing of the traditions, of the Hebrew and, most of all,
the near-eastern and Syriac thinking into the Mediterranean Christendom. Here, what is
thought is no longer a back behind, a first cause, or anything that can be thought as a thing.
Ergo, the radical presupposition as a sensing of what is the “because” comes into play.
Sensing is never causal, but what is causal is always the past and future of what is unconcealed
in any sensing when sensing is sensing of the Element as Ereignis.

The setting aside of the history of philosophy in the radical doubt of Husserl always brings us outside
the Western object and “Elsewhere”, as flight form modern ego or classical nous, and away from
Eastern subject as masterly (effortless) stream within that flows away from the illusion of all things.
The Lotus Eaters, on the one side, and the Utopians on the other are set aside in the
radical doubt so that the student of Husserl in the form of the text with the name
Heidegger gathers the world essence in the question of the planetary Essencing of Technology.
The question of the thing, again, sets us into the ground of the Frage about Wissenschaft,
the das Wissenschaft Dankt Nicht. The question of the non-thinking of technology means
that the thinking must enter the technological essence as its thinking and not allow itself to
be cast out under the rubric of a subject and object. In approaching the thing, in what follows,
we approach the confrontation of the essence of technology, which is Ereignis of Da-sein.
Posted by epistemeratio at 11:19 AM