A consideration pertaining to resolution towards a non-clamorous investigation 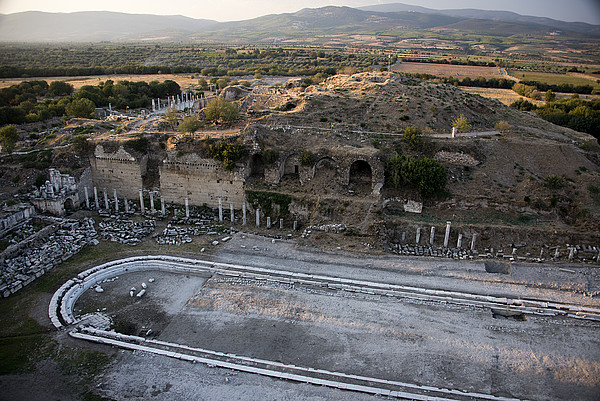 We modem chaps, with our short-lived but all the more clamorous
discoveries, are hardly able any longer to assess the force of the
philosophical effort that had to be exerted to discern that being as
one is in itself many. But based on Plato's insight, it was once again
an equally decisive step for Aristotle to discern that this manifoldness
of being was multistructured, and that this structure had its own
necessity. Aristotle's pointed confrontation with Plato stemmed directly
from this. Whether Aristotle's πολλαχώς represents only a
continuation of Plato's later teachings that the one is many (ὲν—πολλα).,
or whether, conversely, the Platonic ὲν—πολλα represents the still-viable

Platonic form of coming to grips with the already awakened Aristotelian πολλαχώς;
by the elder Plato, will probably never be decided.


Socrates: this ‘given’ what is at once the one here, and the genus. Socrates, as he appears in
Plato’s works, is essentially fascinated by the soul’s vision of the genus. They eye sees this one
and the soul sees that genus, but what is the eye? Aristotle claims that the eyes see colour, the
special sensible of the eye is color. So far as we consider Aristotle we could as well regard this as
a “condition for the possibility”. The domain of dominion of Socrates is not essentially that of
Parmenides so far as we consider it by asking, what is tendentious in Socratic thinking?
With the ὲν—πολλα we may still move in what was already “awakened”, and awakened
as much for Socrates as for the rest of the Greeks, since Parmenides, but here we do
it as one who wants to learn manyness and oneness, and, most of all, the oneness of
the many, and the manyness of the one. It is obvious that nothing “practical” corresponds
to this inquiry, yet, the essence of truth is the objective one sets out for in such inquiry, in
“genuine philosophizing”.

What covers the “earth” is color. And yet the world, all the goals, are the “same” for all beings only
as they touch this earth, this that is “outside”, and not “all the goals”, which is the emotion and the
intellect, and the will, and the need of this or that being, in this or that intensity or laxity of its power
to face the earth. All the same the fourfold of “all the goals” is not the many in the sense of ὲν—πολλα.
The dominion of this thinking requires a strenuous thinking, not to think, but, rather to overcome the
resistance to not attempting to search for the avenue of invasion that it itself shows from itself.
This question of what is “awakened” never speaks to what is already the subject of investigation as
a “problem”, but, no more does it speak to what one wrestles with, what makes one sleepless,
as a genuine question upon which one might shatter oneself through the passion to which, at
the point of contact with that region of questioning the world shivers as though touching the earth.
It is even that what is awakened is more like the habitual that is not explicitly noticed. But, not the
habit of this or that one, but the energia that breaks into this or that dunamis, and the dunamis that
is the pure energia.


Here, truth is not the truth of statement. The truth of statement moves in the region of non-being.
Such that being and non-being are never ὲν in the sense of ὲν—πολλα. “Nicht nictet” is still a
statement that “narrates”, though, true, without the Laws of Thought which govern the availability
of what is said correctly according to what is there and judged to be there.
Posted by epistemeratio at 7:22 PM