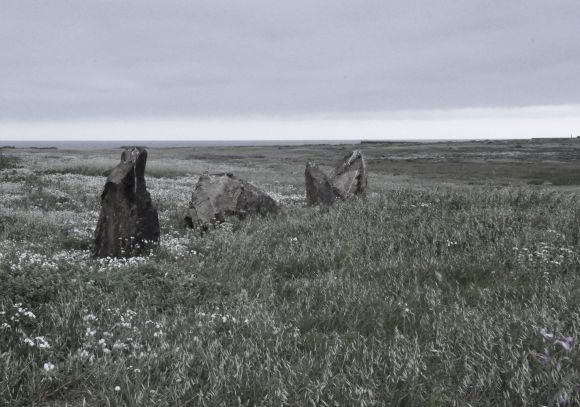 
In this case, it does not refer to the aforementioned four ways, but to


one of them, one which again and again assumes a certain priority:


category. This ὂν, that is, εἶναι in this sense, is not only one among
the πολλαχώς of four, it is in itself a πολλαχώς λεγόμενον, namely,
in as many ways as there are categories. Compare a23f.: ὁσαχῶς γὰρ λέγεται της κατηγορία. H.] τοσαυταχῶς τὸ εἶναι σημαίνει. Thus, this ὂν is itself πολλαχώς λεγόμενον because here the λέγειν is the utterly exceptional λέγειν of the κατηγορία which already prevails in any λόγος whatsoever.

Beside from the sense that ”poly” means the fourfold, it also means that the categories are manifold. The categories, one of the fourfold (of ousia), are a “poly” “within” the fourfold of ousia. The being [ ὂν] that is existence [εἶναι] is itself manifolded, and, a referent of the logos πολλαχώς λεγόμενον.

“the λέγειν is the utterly exceptional λέγειν of the κατηγορία which already prevails in any λόγος whatsoever.”

The saying, which says category, is already saying in each saying. Category refers to the primary categories, such as the where or the when, but also, ultimately (i.e., beyond the cabined region of the categories proper), any saying. The logos is every narration of being, such that being keeps being a predicament for care [Sorge] or Da-sein.

In this passage what we learn is that being as such, which is one, is housed in what is many, poly, in the logos. This speaks the predicament of the region of onto-ontological or Western being as such in its unlimited bound. On the one side logos can never speak logos, except as a narration, and on the other, being, which is one as ousia, though under nous, can never cease to be the beings. And so is not only ousia.


The almost higgledy piggledy character of this situation, is, nonetheless, something that belongs to the subtle contours of a proper attentiveness. Which is to say, not something cooked up in a clever head. Everything depends on such a derivation, confrontation of its onslaught as confrontation of the awareness of the historial, and its primordial ground. If this is so, one is compelled to confront the grund, or basic difficulty, as it is spoken by the historialy present logos. Logos is never what is mere symbol, nor is it the interpretation of the symbol, but it is expressed by noting Da-sein does, or, it is the transit in the “-” which is running through the world at the point of disappearance when, it is thought as language, and not in the Aristotelian manner of man’s essence (as the rational*), where what is most compelling is no longer sensed positively as right conviction, or, taken negatively, obdurate mentational fixity, in the human being, nor, on the other side, that of the Da or of the sent thing, the given, is it the utterly forcible gravity of causal concatenations. This position is thought from the “-” as radical presupposition, expressed according to the notion of a “steadfast resolution” which is no human opinion, but a drawing forth in the attempt under the faint gleam of attentiveness. Thus, it is the attempt to think, not from what is undeveloped, as the formal being of a transcendental region, but from a time which is not time by any dalliance of a vital experience.

* What this "rational" says in Aristotle is obscure. When rational means the true, rather than the illusory, it stands over and against the true as against the false of active deception (the lie). The sense in which "saying the thing that is not" is wrapped up in various questions concerning the nature of man's inner opinion, appearances and the intellect's truth, and the first dialectics, is lost in the excess of modern brilliant clarity concerning these murkiest regions (here is not the place to go into what is said, but we are only participating in the movement of the methodos as it senses the text.)

Posted by epistemeratio at 2:31 PM