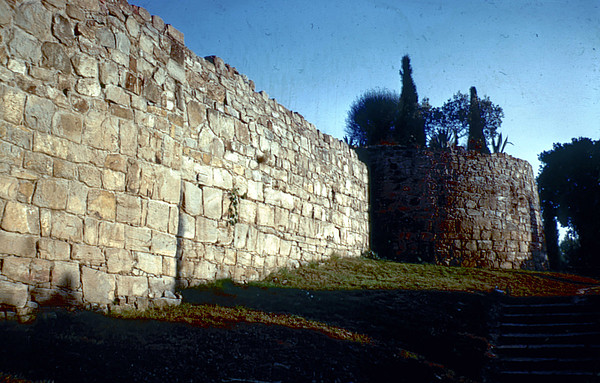 Thus we have the πολλαχώς of the various categories within the wider πολλαχώς (τετραχώς). The  πολλαχώς as such is itself a δίχως λεγόμενον; it is said doubly. The connection between these two must be seen clearly, not only in order to get to know Aristotle's use of language but so that the Aristotelian question of ὂν can be conceived philosophically.


Here we have come to the end of § 2 of the Introduction with the heading: The Aristotelian Question about the Manifoldness and Oneness of Being. The notion that the ”oneness” is to be taken as the question about essence in the sense of asking, ‘what’ is this?, what kind, person, place or thing, substance as essence, form as the “what-being”, is dispensed, since that is but one of the (divisions under the) categories, and, on the other side of the ὂν is taken up as ousia, the logos is a hurricane, for which no storm windows will suffice. Yet, we begin with the sense of logos that we become when we attempt to be attentive to Aristotle, as that ergon which is the historial thinking of ousia. We Narrate the logos, relate or tell it, which is thought under ousia, which is becoming the logic of the Schoolmen, which is already become the logic which states the First Philosophy (as the coming to be of the dunamis of the First Beginning, ergo, the establishment of Aristotle’s basic position). Beginning itself, says, dunamis. Yet, it is also being narrated, and that means, not reckoned with. Once we admit the will, seeking a owned worthiness, is not at work, do we not slip away from the problem as stated in Dugin? The claiming, by freedom, of the basic being. And then attentiveness in this limited sense is thought against the will, as what is not connected to that class of dangerous beings called humans (even when they are thought beyond the position of a basic holding sway that only afterwards congeals as a knower, and that that is known). The attentiveness is not a “not yet”, on the way to a New Beginning. Even less is it a ghostly and unplaceable dispersion of (as it were, postmodern, liquid or risky) “consciousness” out of which anything might come to pass, from the cloak of an infinite abyssal unrestricted region.


In the text there follows a graphic that goes through from a solitary ὂν, into the fourfold, to the categories, and terminates in λόγος. Narration is not fiction, but, nonetheless, insofar as no metes and bounds make it firm, as a logic, it never gives itself to a mere saying of what is. Whatever seems to say what is, embracing one with the thought of being true, has strayed from being. And the logos, as such, as set off against ὂν, is called the First Beginning, or the Greek Beginning. It is prior to logic of any kind.

What is λόγος here? It is ‘not yet’ narration, it is speech about what is available, what one comes across, like a electric light that shines and shows as it moves, everything is “uncovered” by the passing light, in its availability or presence. And yet, so far we don’t see the basic metaphysical sense of Aristotle’s position, which is why we are preparing to consider Parmenides (in the next section of the Introduction), in what follows. Metaphysics here means: the historial as it rises to the return (return is something never to be thought in brute causal determination, rather, the historial and the Return, fundamentally speak the same End of Metaphysics, as the gathering of what is its past) to the Question of Being. Thus, in terms of laying border stones, it is the ergon of Heidegger understood as the releasement form the understanding of being as a Narration. The logical as a saying of what is available, becomes the certitude of the basic thinking, such that a thinking is the basis of any knowing. On the one hand, logic becomes Symbolic Logic, the analytic of Thought’s certainty as datum, on the other it becomes the speach that addresses the historial. Narration is the same as the newly raised metaphysics as the End of Metaphysics. It speaks only so far as it does not find resoluteness in the staunch Attentiveness that bellies Thinking in coming to Being as what is overcome in entering the Thinking. Thinking means the same as that anything is known, and when this is sent as a way that the basic being holds sway, rather than as the presupposed ground of a certainty, it is historially grasped (the historial is never a counter-concept to the causal, what is causal is sent historially). And yet it remains the presupposition, though no longer of certitude about the datum. Now, as the staging place for the “not yet” (never thought as "freely chosen" or willed) of an event of being. The event means the same thing as sensing being, in what is no longer the presupposition, as the fresh youngness of the leap.


The true necessity of thinking what from the very start we have been posing to ourselves as Aristotelian, along with another view, the one of Parmenides, will only come out if we are able to learn something from what follows. We don't have sufficient clarity to ask if this view is another view, or part of the unfolding of the First Beginning. On the other hand, it is trivial, that we would not now, in what we pursue, be racing through this text, if not for the invisible purest light, the opening of the hour where we are. Such an inquiry has never before been.
Posted by epistemeratio at 2:05 PM