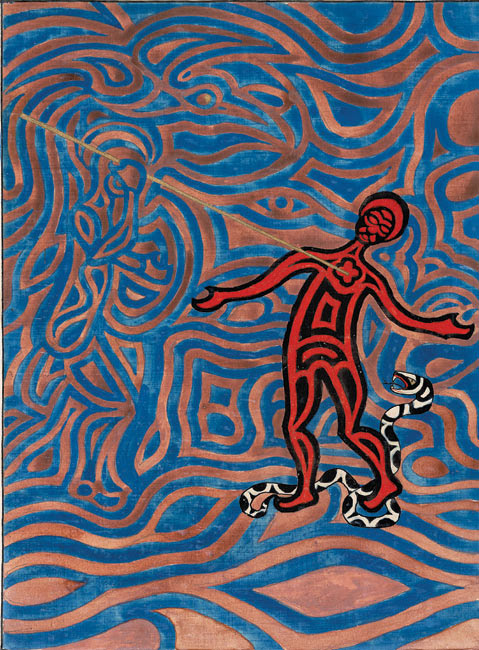 
The gathering and explaining of discourse makes things accessible and manifest. Heraclitus, for example, says this in Fragment 93: ὁ ἄναξ οὗ τὸ μαντεῖόν ἐστι τὸ ἐν Δελφοῖς οὔτε λέγει οὔτε κρύπτει ἀλλὰ σημαίνει" The lord whose oracle is at Delphi neither speaks out nor conceals." On the basis of this stark contrast between λέγειν and κρύπτειν, to conceal, it is made simply and emphatically clear that λέγειν, as distinguished from concealing, is revealing. Making manifest. Plato definitively makes the point in the Sophist when, toward the end of the dialogue, he understands the inner province of λόγος as δηλοῦν, making manifest. Λόγος as discourse is the combining and making manifest in the saying. The unveiling assertion of something about something.
----


Divining, divination, to make known. To devine is to have, in the Platonic sense, a fragment of the truth. Opinion is a divination. Something appears to someone in some manner. They have a perspective, das Man is the common ground, the perspectives, the differently pseudos opinions, each reveal. The common ground is what overlaps. What appears the same to each one, though not everyone is each one, some are alien. The word not evident in the translation given in the Heidegger text, “σημαίνει” says: to show. The guide shows the student to the extent that the student does not learn, but takes up, ad hominem, within, what is shown. A showing, when effective, is a trans-valuation. A going beyond. Whether one can say that the showing is the transalpine region, itself grasped from within the center of Italy, as it were, is only to be seen by the one who follows what is to be found on the path of the thinking.


What’s being emphasised is that what the signs “show”, rather than what they can communicate in discourse, is there in the sentences just as it is to be found in what the sentences speak of. The holding sway, which is time as such, is what the prospect shows! The path is a prospect, a clearing, it shows. But only those who see, then can communicate, as discourse, with speach, what they see to the others who see likewise.


Time is the ground of this appearance, which is guided by the Will to Will, which is to say, the will is not intentional. Insofar as the views, as what is shown, holds sway, it is truth as aletheia, which is unveiled, as this or that opinion, conviction, or principled outlook, within the one who it flows into from the appearance. What appears ‘there’, what, is known as the appearance, and in no other way. The perspective of what shows in the speach, is the perspective “there”. A proposition, That is a spool of thread, ‘shows’, in the same way as the spool as it sits on the table. Honey to the gods, honey for Ariadne, Queen of the Maze. The way they answer in kind, match up, strike out from the path of the valuation which is the letting the appearance flow in.

So far we are reading Will to Will as the manner that showing transvaluates, or ‘teaches’ the inner man, the one addressed ad hominem. So that the perspective, which is the way that what appears to the one for which knowledge of what stands in the propositions and out there is time. This explains the sense of the word of Nietzsche: Eternal Return, in that it speaks to the way the time is to hold sway as the same perspective or prospect. One can’t leave it at this, since in Nietzsche everything said is part of the prospect, and so can snake back, and cast us into the corrosive precipice. However for now we can’t abandon all hope of gaining something from following what is shown in the text; under the presupposition that the leap can come through the thinking.
Posted by epistemeratio at 6:53 PM