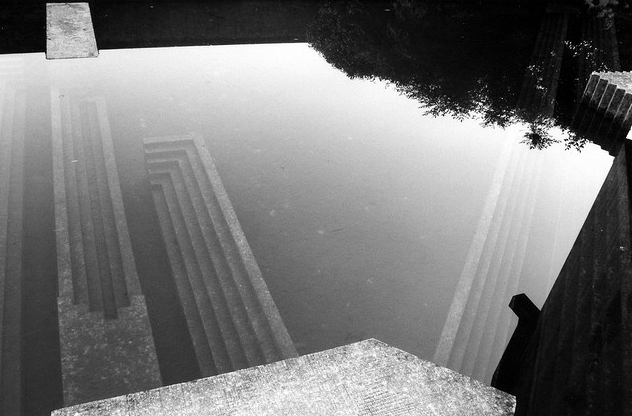 
A new stream which had not existed before the rain, we detect along the crisp silhouette of a hill, blazing in the light. The same we reflect upon in the mind, where there is no space, but only time. For the small streams still pour when we picture it. The being, which is in both, is not this ground in space, which is the ready to hand, nor this reason in the presence of the mind, which is the time of the soul. It is the Element, or its place is that Element, which in the Questioning of Thought is like a hill drenched in fog, in the soaking bath of a fog. Because it remains difficult for Thought. Reason as Ground thinks in the realm of movement, as cause, as when one slams a door, and that causes a sound. And Ground as Reason Thinks in the freedom of a choice, as when one who regards an understanding of what is there, acts in accord with the intelligence so gathered. With the intelligible, there is the ungraspable. For the intelligible, though ungraspable, comes forth as though it were a ground. Just as what stands there as Ground, seems impossible without that which says what it is, that which speaks the things in its narration which always binds. Yet, Thought, as though it had another course, hears what it draws towards and reason names this the leap of Thought which is a transformation of ground/reason as the essence of the Geschick of History, as what Nothing does not have. Attempts to say anything about Thought, are like words that represent Thought, and when they speak of Thought as such, can only reach so far. The Element is as though the throwing back of Thought into the manipulable region of space, but having made some as yet not well thought inversion. This Thought was attempted in the analysis of boredom, where the Element was given as arising with the help of the consideration of a traditional Sabbatarian Sunday where the world, as it were, is closed.

Heidegger constantly attempts to change the basic stratum of Thought, not in order to bring something else that is like this to bear, but in a wholly unthinkable manner. This is why the talk of “letting be” or “releasement” is always wondering about abolishing the necessity of the mortal or human being. Even when the Element is holding sway, in inversion, the human being is still as though introducing something like Da-Sein even into the Element.


One must not prolong a consideration concerning an apology to the reigning ordinary opinion concerning this Methodos or ‘Way of Thinking’, which is the translation of Denken or Thinking, so long as the Thinking is genuine. When anschauen means appearance, which is not to say phenomenon or Erscheinung, it means that the looking at and the look in orginary Thought are cast as undisturbed. Since the distinction must be laid out in secondary thought, derivative on the look that is also the looking, Thought as Denken, as the Way of Thinking, says that this look and looking as what receives what is most seeable in what is to be seen by letting the thing to be seen come forward, is a casting into Question of this looking/look. I.e., it is a casting the originary into Question, by Thinking the Thinking, as the Way of Thought in the Geschick. It is both presupposition and Thought Genuine. Because it is not in a region where one can make the determination binding. Thus the discipline and the risk of delusion in the basic region of the ontology. Because the region of Kant, the Transcendental, is the region of Existence that stipulates its bound in terms of determining what must exist for Cognition, but in Thought the Nothing is the Horizon that lets Being speak above Existence as its Element. Thereby the limitations of Space and Time, as what gives what exists its character, and so brings the human being to be, is cast away in the Thinking that needs no frame to let it be. Roughly this is like the break with Logos as a holder of a First Philosophy. Thus, in the current reflection, the First Philosophy concerns the Mighty principle of Reason, which is the Fourth Law of Thought under the Thinking of the traditional First Philosophy, when expanded.
Posted by epistemeratio at 4:21 PM