Comments from an Ideology of Ultimacy, as a mere dispensing with all ideologies 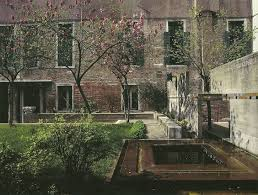 
The transcendental method is intrinsic to the manner in which objects can be objects for us. Cast as objectness, being clears and lights itself in a novel manner. For the Greek thinkers beings were never objects; rather, they were that which continues on towards us from what lies over against us. Beings were more [war seiender] than our objects. Indeed, we may be of the opinion that beings appear most purely as what is present in its own right when they show themselves as objects, which means, objectively. This opinion is errant, granting that we think the concept of an object in a manner that does it justice.


The first sentence is estranging, because if one assumes “knowledge” names a basic constituent of the set of eternal problems how can there be a “method” that is merely discovered in some century or other that deals with this problem? Not only deals with it, but in fact settles the matter in the form of suggesting a field of “epistemology”. Since Kant the human being has been sure that knowledge, as such, is already set behind it. It is not, now, any longer necessary to prove theoretically, in fact, the case that it is unprovable in theory, is the best proof that one need not solve this knowledge problem. The profound depths become a superfluity, any attempt to doubt this is a kind of obscurantism, because it is fated. What is fated? Research into the forms of nature natured, all that is unreasoned, that is pure memorey in the form of instructions how-to-make, this becomes fate. But, in all that, some obscure power remains, a shadowy life, the will of the master of what is natured. Only by an act of faith can one disavow this master, in the form of a faith that there is “determination” by the Natural World. What is this Natural World? In fact, it is the manner of making intelligible, a concept of the Philosophy of the North Atlantic West.


“The transcendental method is intrinsic to the manner in which objects can be objects for us.” It is difficult to settle accounts with this course, with the course set out by this thinking, in the sentence prior to this one. For human beings there is a action that is connected to the grasping of whatever is said. A praxis, which originally meant action, but what is action? Already the Greeks had become diverse and variegated in their distribution of conceptions. A Philosophy of Discontinuity finds its terminus in the fact of its own presupposition of  location within a development. The universal, action, can no longer be what it was. This, contrasts most severely to the view of Strauss. Strauss says, even for Historicism itself, there are those things that are the same. Strauss never holds, with the view of the transformation of the simple.


Here the question is, what does personality matter? I.e., what do the personal, or individual gifts of the thinker say to thought as such? Because in Strauss there is a great sense of the power of the practical sphere. Is this a defect? Is this a defect in a thinker? Does this bring us away from the “long run”? From the reflections of a Nietzsche? Where does the ground of the judgment of the thinker have its bona fide measure? That is the problem of the thinker. Individuals mean nothing, yet, such is the point of all philosophizing when it remains sickly. It is thusly architypical manifestations come to force a "situation" on the thinker, as the organic quality of the fated one. Individuality as the modern identity, as the preferences of this and that, as taste, as attainments and specific things, contrasts with the typicality of the basis of all personality in the archaic being of man who first "raised his head", in the "first beginning". Yet, the "true closeness" is that Elemental overcoming of the hierarchy of all personalities, however "timed", however been and being and worlded.


Here the text tells us that “The transcendental method is intrinsic to the manner in which objects can be objects for us.” It is autochthonous. It is what is ownmost. It belongs to the world. Men have their time. To have a time is to have a world. This is one’s own time. This is that which belongs most to this time: The transcendental method. Yet, who gives any thought to such a method? Certainly scientists are not concerned with it. And no one else either. Yet: “The transcendental method is intrinsic to the manner in which objects can be objects for us.” Distinctly the text says: “for us”. Perhaps the text called Heidegger has simply been in error. But on the other hand, is there not something that is swept aside in every simple obviousness, in what no longer is worthy of thought? The object, the object. It is because one has become oneself that the object exists. At first this can be dragged up out of the abyss by thinking of Freud. Because the expression “ego” is unnatural, as it were. Why is there a ego, full of contents, a “complex”, and then something else. Since when is there an “ego”? Everything points to a sort of illness, that wants to use the Natural World in its own way, perhaps remorselessly. But the “ego” is not an invention, it is the expression of what was already there, even since the pursuits of Galileo began to draw forth the object. Lukács says: “and then one fine day the French pulled down the Bastille.” Which is to say, no justification out of theory comes forth to say why, just then, Galileo came to bring to pass this great pursuit. Things so happen according to this Historicism, this Existentialism. Such is the thinking that proffers itself when the Western conceptions collapse, come to triviality, and begin to crave confusion. When, then, will thought become possible? So long as these things obscure the thinker, posing as serious, being the world and one’s own time, thinking remains a kind of myth, a fancy of romantic ruminators.

On the other hand it is said that “The transcendental method is intrinsic to the manner in which objects can be objects for us. “ Which is something odd, because no one needs such a method to encounter the search for the secrets of the object. The object can not dream of going its shadowy way, in its own way, for it is sought already as the subject of the knowing animal. It is sought as the nature natured which is the accrual, the greeding up, of all potencies and powers in the Natural World. Such is the entrancing fate, the coming Utopian blush. Such would it all appear to a subject still dreaming towards new pursuits, obscured by the current Geschick.
Posted by epistemeratio at 5:11 PM