A remark on a change of a so-called Epoch, from Lessing to Kant 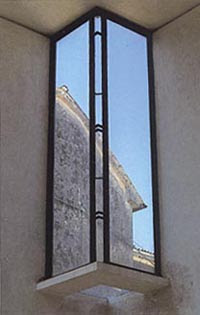 
The rendering of sufficient reasons resounds more clearly in Lessing’s translation of objectum by Gegenwurf [“counter-throw] as a throwing-forth which is thrown forth by a subject. Lessing’s word Vorwurf [motif] still retains, in the language of art and the artist, the sense of the subject of a work. Vorwurf is actually the literal translation of the Greek word πρόβλημα. Incidentally, in order to mention it as food for thought, today everyone uses, in our much misused language, the word “problem” when, for example, the auto mechanic, an honorable man, cleans the dirty spark plugs and remarks: “That’s no problem.” It certainly isn’t.

The last remark is in a way unassuming, in that it might as well be understood at once as though it were being said to someone who understood the mind of the one speaking it perfectly. We must not become like those who are thoughtless and take the things that are manifestly demonstrated to be free of snares. We need loudspeakers because what we are doing is coming to make things more clear than anyone who has no familiarity or inclination towards thinking would ever suppose made any sense. Everything in thought must come clear to us, not yesterday, but just as we think it. Only in clarity that, as it were, comes more into a true closeness with what we discuss, can one begin to question at all. All questioning that is not about what is truly close is trivial, as when one does not distinguish one sense of the word matter from another, homogenous natural matter (all-but devoid of the polysemous character of the eidos of Aristotle), taken in the mathematical interpretation of the philosophy still known to Berkeley, rather than a subject matter, a thing, taken in the vaguest sense known to language, under discussion. “the word “problem” when, for example, the auto mechanic, an honorable man, cleans the dirty spark plugs and remarks: “That’s no problem.” It certainly isn’t.” How come we don’t know what this means?


It could mean that the matter is not a difficult one, not a serious problem, but no problem, it’s easy. But on the other hand what comes to mind is that something broken needs to be set right, and solving the problem is “no problem”, again, because it is easy. Already, if we rightly see the texture of the difference of these two accounts of what problem might mean, we see that a sensitivity regarding thought must be there in the one who thinks over any matter at all. But, on the other hand, as a rule, we can understand such things, with a little prodding, in ordinary matters, but only it doesn't come to us clearly and with distinctive determination in the distinctions made. One knows what one means well enough without coming to it explicitly in closeness. Neither the first nor the second manner of thinking is what is thought in the comment: “It certainly isn’t.” That points us to what is said in the remark: “Lessing’s word Vorwurf [motif] still retains, in the language of art and the artist, the sense of the subject of a work. Vorwurf is actually the literal translation of the Greek word πρόβλημα.” The Greek word, problema, problem, means motif, a motif is a kind of trope. In the late works of Bach one finds the motif of counterpoint. Since the time of J Paul Getty man has known a special case of the motif of (good and bad) rent seeking, which is to charge more than what a thing costs to make or maintain, as a matter of a kind of sacred duty to the world system (compared to the Japan that Mishima still somehow received, in its decline, prior to the war, there is almost no comparison. Such was the opprobrium of “money makers” within that world that our on-running pondering of “Iki” still senses, as what is set upon a “what has come before and still is not destroyed”, i.e., it is a form of coming to presence of withdrawing being), in the sciences one knows the motif of the “it works”, which is the discovery of nature natured as something that is Natural as upheld by the ‘conditions for the possibility’ which is Reason. The problema is more like a god than like a matter that is easily set aside.

Lessing is mentioned always as that thinking that has not come to clarify the conditions for the possibility. Lessing is prior to Kant. In so far as what is concealed is presented to Lessing still more immediately, like someone who knows what one means, as in the examples above, but does not reach them in closeness, in distinctness sufficiently established by thought, he is more at play in being than is Rousseau, so that though they lived in the same years, Rousseau was already coming into another epoch. Rousseau created the atmosphere where it became possible to regard men as primitives in the decisive respect of history of the subjectivity (one says these days, the “identity”, as what is artiface). In Hobbes nature never, or only scarcely in the analysis of physiological conditions of the passions (which thus questions the standing of the soul in Aristotle), means more than anti-social in the sense of one who has the art of god active in one (i.e., nature), but not the art of men, in the mechanics of their commonwealths ordered by laws. Thus the well-known critique of Rousseau (of Hobbes' false natural man). But when we come to Kant this epoch finally stares across an unbridgeable abyss into its former being, such that the talk of Foucault, when he says that at a certain point we do not know if a thing read is right or wrong, for instance a medical text, because the claims raised are no longer sensible to us, speaks to us too of this staring towards the alien epoch, which, yet, still resounds, and according to the definition of eternity, the sempiternal, found in the book connected to Plato’s school, was and still remains. That which is now not destroyed is this epoch, does the concept of the sempiternal, even of time, conceal being? For now we are not in a position to say something about how that stands beside Reason, in what Leibniz says: Nothing is without reason. Everything has in it, already, now, something that is its reason, as a condition for its now not being consumed by the nothing.
Posted by epistemeratio at 12:25 PM