A Limited Remark, on a Comment of Alecsander Dugin (a reader of Heidegger) 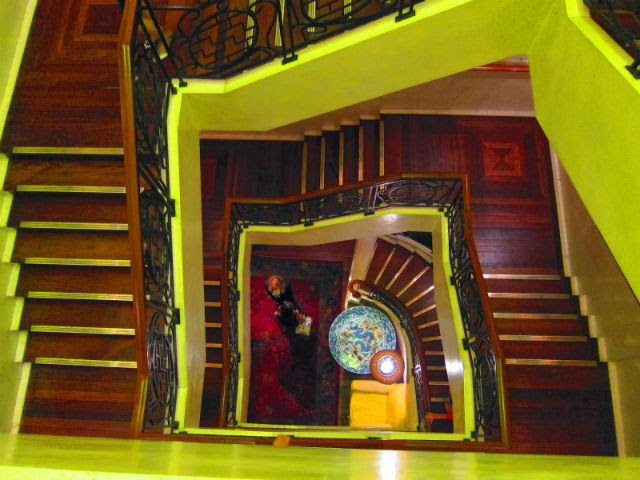 Our presupposition is that thought must become dislodged. Heidegger says that he made a “clumsy” remark: language is the house of being. This remark is quite striking, it stands among the highest pronouncements of Philosophy, which means Western thought, starting with the archipelagos of the Early Greeks, philosophia, which is at first a Greek word, which looses its distinctive character if one makes it a net that covers all things, it has at first no meaning, and says nothing. This word is not clumsy, except that it is beautiful, and thus it stinks of eros. In saying something about a marginal remark of a contemporary student of Heidegger, Alecsander Dugin, we begin this way because we use his remark to ask about the dislodging. Considering hermeneutic circles. Whatever disturbs us, like this word of Heidegger, when it glitters might become too fixed in its rubric, as a narrating word, in its mere formulation that clarifies in canny coming forth that conceals in brilliance.


At first it seems Dugin has made a rather unfortunate stab at what he calls “the war of the discourses”. An unpleasant foray into ideology, as propaganda, which compared to the elevation of philosophical reason which seeks to learn, to be as open as can be, and not to be prisoner of traditional allegiances, is terrible and useless. But what confronts us is the lack of guidance when it is no longer held as adequate to prefer one world to another. So long as this point is thought as a split between history and nature it is harmless, or, at least it is not the most daunting thing. But another posture arises for the one who comes to historicism, when it is not a relativity but a simple open-minded coming forth no longer a criminal in the eyes of unwise judges seeking the traditional things: “Not only do we lack any criterion which would permit us to evaluate the perfection of an epoch of metaphysics as compared to any other epoch, the right to this kind of evaluation does not exist.” There is no higher judge, nay, there is no judge. Historicism is only realized because that thought of relativism makes absolutely no sense to one who thinks of being, and not of some development or seeking of a victory over reality of some manner. Of, say, a Utopia; an arrival from the "lack" as that admirable Bloch had it.


However, returning to Dugin, one is far from ready to say that this or that man brings forth an “epoch of metaphysics” simply by declaring that Wittgenstein has demonstrated that there is no truth, or for some other reason of argument. All the same, let us start from the claim we find in the video (bellow). At first withholding judgment, but only considering that ready on our mind is the sense of being exposed to cheap tricks of mean and treacherous men. But, yet, one must be open-minded. In the dislodging, it would even be possible to think in such a way that such considerations no longer chiefly interest us. Whether all this is an impossibility, a moral impossibility, perhaps even to include a whiff of sarcasm in the phrase "that admirable Bloch" is already the sign of a lack of heart, and a fatal error, or wrong for some other reason, which can not yet be allowed to come to a definitive clarity. It lurks, as it were, in the thinking that goes its own shadowy way. We human beings, remaining animals of representation, live in its withdrawal, which is at the same time, what lets us sense its play and its arrangement. Most of all, from the moment of its birth, the human being was showing itself as wicked, in its laughter, which is most of all the sign of its joy in the down-going, the forsaking of someone else.


The video shows us a man who is not a native English speaker making some ordinary comments in a serious tone, not smiling at all, and then, he begins to speak of “something incredible” and “completely idiotic”. Here we are told that “without any arguments at all” some attack is made on his “country”. The rest one can hear. It is largely unremarkable, and has the sound of typical political speach. Ordinarily, one must say, this notion of “without any arguments at all” means little more than that common sense does not always need arguments. To demand arguments of common sense, of what it finds patently clear, is nihilism. To refer to “crazy accusations without any arguments” as the talk of “such idiots” is only to play the role of a rationalist who demands reasons for everything, which itself is a rather silly thing. And not at all possible to anyone. No one can give full reasons, except for something that has no future, and is already complete. Or is repeatable in a wholly dead way, like a closed experiment. But in addressing this we ask not about whether it makes sense, but about what it means to play a “war of the discourses” in the context of the ethnos. Dugin is chiefly that thinker who, in the guise of an ethnologist, has spoken of the ethnos. But, he is also a Marxist.


Is it possible to treat the ethnos in the manner of a “metaphysical epoch”: “Not only do we lack any criterion which would permit us to evaluate the perfection of an epoch of metaphysics as compared to any other epoch, the right to this kind of evaluation does not exist.”? Thus one comes into a existential war of worlds? This is not what Schmitt calls a matter of the enemy unless we are to believe Dugin is a ethnos. Meaning that, when the analysis of the state goes beyond the state, it reaches the culture, and when the argument about politics comes to this ground it is no longer a matter of a determinate concept that can come into our sight. However, isn’t Dugin a bourgeois? When Marxists speak of Bourgeois individualism with contempt, that is not something one must accept, not at all. This is the matter of the discussion, e.g., with Max Stirner, and so too, a fortiori, with Nietzsche and in a certain sense even with Heidegger and Jung. One can not at all concede this point to the Marxists. Yet, Dugin himself accepts the teachings of Marx in some way. He speaks too of the “imagined community” (in order to denounce the bourgeois "coward"), following radical leftist thought, which is to say, of the bourgeois.

What is then in question is nothing else but whether Dugin can shape himself, and administer himself, so as to cease to be a bourgeois simply because he has made some arguments? Has he only made some arguments? Is he more than a bourgeois, a mad man? Dostoevsky used to say that his status, one of his characters I mean, of course, perhaps not Dostoevsky himself, but did he not speak out of his nature, that if he had been called a madman his status would have discernibly risen. The originality of a mad man is nothing if it, I pray say, has no merit. What merit would it have, who is the judge of this merit if reason is no longer that god that can judge of all things? If reason is all too human, and ceases to be a god? Wouldn’t thought need to break from all those who go for long lonely walks, which have already been themselves only because sheltering places were coming for them. How often has politics masqueraded as thought? It is notable, quite apart from this, that the Marxists, when they finally demanded that Marxism be applied to itself, began to become existentialists, but without ever divesting themselves of the asymptotic spirits of their tendentious love of politics? How can a bourgeois claim to be an ethnos, what is the claim? Does the bourgeois even exist, except according to the Marxist?


When one thinks according to the structure of classes, and invades all doctrines and all thought with this tendency, one no longer sees this “clumsy” house of being, but sees a materialism of struggle, which raises up as a Truth. It could as well be regarded under some word of Nietzsche's, but only that Nietzsche had seen something more than Marx in that he saw the lie of that Truth as ultimate. Whereas this is not ultimate in the thinking of the ethnos, but relative to the ethnos, there is no truth but that ethnos is as such, that is implied in this thinking, which is essentially political. Thinking is then a subsidiary of some “mission”. What befalls is denied its reception, and no dislodging nears.