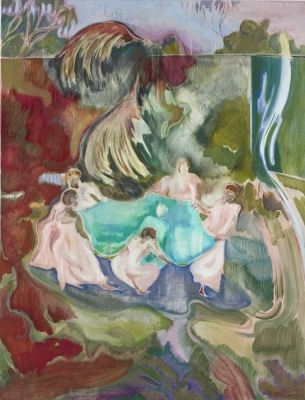 Aletheia is supposed to be a statement about what is found out by thinking
(Thinking: as a specific modification of the dark concept: experience.), but not any thinking, ancient Greek thinking. The supposed description: ancient, gives us something to think, but it is not in the highest sense telling. Classical might mean Plato and Aristotle, and the Athenian scene, with each place known to that scene. The Egyptians were supposedly visited by Plato who studied the Pythagorean teaching at Alexandria, at least according to one source, Cicero. Archaic might refer even to the so-called “early Greek thinkers”. Heidegger seems to think Hericlitus, by example, as a thinker. A thinker is not: antilogokos, but prior to the time when the logos raised its head at the gate of the college professors: Plato and Aristotle.


Ἀντιλογικός, this word appears in the Theaetetus with uncertain perplexities connecting to it. How does one unmask this thought without venturing something that could lead us into a shameful foolishness? Into philosophy in the contemporary sense? If something is not quite serious, but yet still has the force to make one ask about it, one speaks of philosophy. This appears in tandem with the old sense of the philosopher as someone who falls into wells, but indeed, it has nothing to do with that. The current sense indicates that a ridiculous practice, that is something like a game, has replaced the search for what is aletheia. In fact it was the wise, the scientists, those who had knowledge not quite useful to men, for example the stargazers with their science, who were thought likely to fall into wells. When was Socrates accused of such a blunder? Aletheia was supposed to concern the question about what the human world was, to in a peculiar case, of the klein nicety, of the subtle detail, to channel the whole meaning of the human world. But the human no longer exists, it has become ridiculous, in the face of the wisdom, of science which no longer needs the description “modern” to modify it. This wisdom, is, as always, empty. It is merely the so-called fact without the beautiful, the true, and the good.


Not at all, being the man I am; but I might if I were a real reasoner (ἀντιλογικός); if such a man were present at this moment he would tell us to refrain from these terms, and would criticize my talk scathingly. But since we are poor creatures, shall I venture to say what the nature of knowing is? For it seems to me that would be of some advantage.


Venture it then, by Zeus. You shall have full pardon for not refraining from those terms.


Have you heard what they say nowadays that knowing is?


Perhaps; however, I don't remember just at this moment.

It is strange here that the translator gives “a real reasoner” with the sense of the ironical utterance of Socrative implied. Antilogikos is given here, in the translation, as “a real reasoner”, I repeat that. Irony means in the Platonic texts, I hide my superiority, I do it in each line, in each paragraph, in each logos, in the whole of the dialogue. What is logos? In the ordinary language it meant speach, but in Plato it already was a technical term. It meant also, commonly, a speach or something memorized. Socrates has a passion for every logos, and must hear every word. Even if it means going beyond the walls of Athens, which is something that, properly speaking, happened only once. But, as many as three times by another count. It’s strange that in the dialogues of the highest import, the Laws, the Republic, and in that fantastic discourse of the Phaedrus with its absolutly odd reference to the Platon tree, the dialogue takes place literally in the shade of Plato. But why is all this trivia introduced in connection to the subject of aletheia? The teaching of Plato does not concern alethiea directly, because the supposed subject of Heidegger is the feature of the Geschick of Being, as the thinking of Greek Da-sein. So that it was the, to use the Kantian phrase, condition for the possibility of philosophy at Athens.


The condition for the possibility of science is ratio, the essence of the object, as it stands aside from the subject, is ratio. Ratio does not mean that in all experience, pushing aside what is accidental, there must be space and time, but rather, there must be causa as reason qua reason. Reason qua reason is like the phrase: truth as correctness. Thus the sciences debate within their peculiar penetralium whether mathematics are just mathamatics, or the reason as the stuff itself. This corresponds to the thesis of Leibnitz, nothing is without reason, carefully bathed in light, and as carefully placed in the shadow, by Heidegger in his book on Reason.


Alethia is thought by Greek Da-sein without the notion of the Geschick of Being. Whatever notion says here must be thought by someone with the sense of thinking, and then the importance of the way of thinking everything that seems to carelessly permeate the air, like condensation, in a storm that would merely revive withered leaves, in order to emphasise the sun when it comes out of the cloud cover and the squall, must instead realise that the antilogikos has already been in play. It is the play of Being, as much as the House of Being, if one may move in that word while asking about it?


The continuation of the discussion, above, seems to ascend to something that removes the sight of the human being from the primary scene of the “knowing” (which was the subject of the antilogikos):


Socrates
They say it is having knowledge.
Theaetetus
True.
Socrates
Let us make a slight change and say possessing knowledge.
Theaetetus
Why, how will you claim that the one differs from the other?
Socrates
Perhaps it doesn't; but first hear how it seems to me to differ, and then help me to test my view.
Theaetetus
I will if I can.
Socrates
Well, then, having does not seem to me the same as possessing. For instance, if a man bought a cloak and had it under his control, but did not wear it, we should certainly say, not that he had it, but that he possessed it.
Theaetetus
And rightly.


The ἀντιλογικός is not, one supposes, someone who doesn't speak: an animal without speach. Without ratio. Ratio say logos in Latin. But does logos say “I mark the relation”, in the way one sets down the relation between the radius and the circumference of a circle? There is a kind of sleepy logos, to use the word of Heraclitus, that those ones sleep away there lives, that they sleep while awake, but how are we supposed to think it? In one sense the sleepy logos, the pusillanimous (the logos of the small souled) logos, the lazy logos, and the citizens speech are the same. The citizen’s speech is the speech of the one who does not discriminate between genus and species (Socrates in the Phaedrus mentions this characteristic, of the one’s who love the logos). The citizen has a logos that is knowing, because it has not asked whether or not it knows. The citizens are the ones who killed Socrates because his irony became known. Because the megalegoria, the big logos, the unbearable big mouth which as Xenophon tells us was Socrates' reputation from his Trial, where he, Socrates, goes beyond any talking big ever known, saying, you, each one, know something, you labourers who make shoes, know all about shoes, and you diecasts know how to listen to testimony, but surely what I know, that I know that I don’t know the highest things, makes me the greatest knower of them all. Thus the death of Socrates, in the logos, is inescapable and not a suicide, due to the unconstrained boasting of Socrates and the envy of the Athenians.


If logos can mean so many things, why not also the poetic, so-called, logos of Heidegger. This is a sense unknown to the Greeks. With Heidegger it means the same thing as truth as correctness, because this is the same as the saying: it is because it is. In this sense even the essence of causality, as what must connect one moment to another is not named. And the same as we said above about the mathamatical reification dispute. But what poetry says for the Greek Da-sein is the knowledge, the pseudo-knowledge, about the human world proper. Which one only has to go to philosophy proper to see was false and: pseudos. Philosophy, when it treats aletheia naively, finds it wants to know what the world is with the human beings. But without the Greek Da-sein, it seems to say: what one believes the world to be about. The believes becomes the ideal, and finally about the year 1915, degenerates into the value. The value is simply what remains on the other side of the correctness of the reification of the mathematical models as the arbiter of the being of beings, as what is essential and not accidental to science.

Naturally we must contend with the provocative character of the projection of the Da-sein of the Greeks, as ancient Greeks. Its status, as what it is: as how it is to be thought, is the decisive question of Historial thought. We ask: is there past as Historial past? And this means, if we speak of past in the ordinary sense, e.g., what happened last week, how much money was in the bank last week?, we don’t make a Historial utterance. But what if we ask: what was the antebellum period like? And we mean, the historiographic period leading up (teleologically) to the American Civil War, how is it that the notional world is thought? As sheer academic fancy? However we think such matters we do not think the matter of Historail thought, because that already assumes a knowledge of what it actually means to have a sense of aletheia as the klein detail of the world of some Da-sein. In the posts that follow we must attempt to move in the region of these questions, which imply the abandonment of the possession of the current Da-sein.
Posted by epistemeratio at 4:29 PM