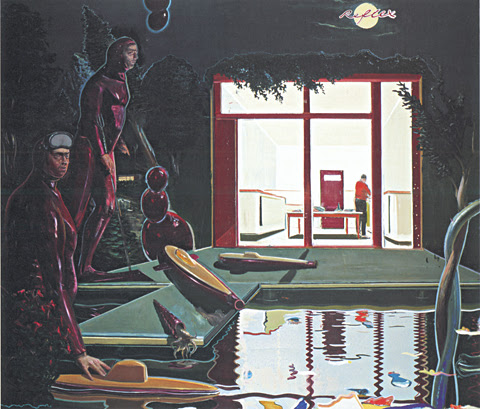 The basic datum according to Heidegger and Husserl is given prior to reflection. Through reflection comes the ‘I’ and the there (as an inferential doctrine, e.g., that in Hegel). So, it is not ‘given’ prior to reflection, but is prior to reflection. There is nothing ‘there’ or ‘given’. Descartes is taken from the start of his reflection, ignoring the second part: think, but not, therefore ‘I’. The thinking means: “The tear rolls down her pallid cheek.” or, “His face was lit up with cheer.”, or, “The crowns of the trees surrender themselves to sky and night.” Only that language, through its discernment, has disclosed something. In this sense the language is prior to the ‘I’ or the ‘there’. It is called, by Heidegger, the house of Being. It is not Being, but the house of Being.

In order to train thinking, as ‘seeing’, Heidegger says: “How does consciousness, knowledge as representation, relate to Dasein? In this you must not reflect, but rather see.”

The ‘world frame’, the picturing, the imagining. The thing pictured is the imagined. The imaged. The image, as something done. Descartes: We no longer accept the ground of knowledge in Socrates. We no longer accept craft, e.g., the shoemaker, as a knower. This is no knowledge as certainty. But it is knowing as pistis. It is the knowledge in the sphere of average reliability. It is the reliance on the simple and the everyday. As what is known, we don’t accept it as the certain ground. Descartes wants something grounding, more principled, than what is reliable. The certain is more perfect. What is certain is that, when the face is lit with cheer, it is so. The “it is so”, means, in combat with the notion, we must check, and see if what seems to be, really is, “it is so”, or, better, the archaic English, so 'beest'.

Descartes, with his certainty, begins to build. But Husserl and Heidegger, do not build “minarets in Switzerland”. Their claim is that, unlike the religionists, the objectivists, we set out on no project. We limit ourselves to the strict datum as such. Descartes, instead of philosophizing, founds the ‘I’. He does this because it is the ‘I’ who will know. No other will know, except this “I’. Descartes wants to construct knowledge, he already wanted to do that before he doubted, before the ultimate and primordial doubt.

“How does consciousness, knowledge as representation, relate to Dasein? In this you must not reflect, but rather see.”


The consciousness names the one who knows. They might know not just things, but also intentions, also anger, also wishes. The consciousness has only the limit in that it knows, and that what knows must not be all. For in knowing it has its object. It knows all, in so far as the extended substance is all. But, it does not know all. For the second substance is posited.


Consciousness, then, is the counter concept of representation. The representation is the same as the idea of the objectivist world. As soon as the Cartesian dualism is destroyed, through the objectivist religion, what is left over is only the extended substance. It is disputed by its counter concept, the consciousness as the reflection. Both are part of the things that flow from the human discussion, as a faith.

It is strange that the statement is given as a paraphrase: consciousness is determined, as though in advance, as knowledge. Specificly, knowledge as representation.

Is consciousness knowledge? Is knowledge consciousness? These are the questions that in their obviousness, went unquestioned for the longest time. But Dasein, as what is to be “seen”, in relation, to these two, is concretely to be thought in the dubitative envisaging. However, this means the language disclosing is part of what is to be seen. In the reflection-knowledge the language is not noticed.
Posted by epistemeratio at 1:41 PM