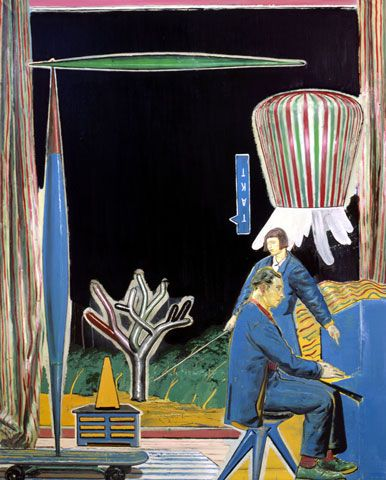 
Apophansis, assertion, we understand as predication. It is presupposed that something, over there, is determined as something. That is a word, the thing typed on the screen. That is the “cursor”, i.e., the thing blinking on the screen, in the wordprossesor. This is the simplest form of logic, of logical judgment, as understood from the beginnings of Greek philosophy. The doctrine of logos. Kant says, one can also, in the  extreme case, determine the thing as itself. So that the “synthesising” of the screen and typing, the  “typed screen” (i.e., the screen with writing on it) can become the synthesis of the thing with itself, for instance, the screen is a screen. Heidegger says, the law of thought called identity, reads, a is a. It doesn't read, Heidegger constantly stresses, a = a.

It is in this way that identity, as nature, or the truth is supposed to be uncut, not by man as man, but by language as episteme, as nous or the knower. The knower corresponds in a peculiar way to the “ends” or “goal”, but in the manner that it does not, that it is something beside ends, it has its real and important determination. Ends corresponds to value, value as the polemical contrast with fact. The fact has to be understood empirically, within the lived situation. Descartes was a man concerned with dissecting animals, and with the problem of perception. He was thus concerned with what today we can call scientific concerns. Later, when the modern sense of fact was established, it was in accord with the split in the German universities affected about 1850, between what now is called the sciences and the humanities. (It should be noted that in other centers of thought this happened much later, although there where people concerned with what is now called science, modern science, and established schools and buildings and clubs devoted to these problems, they were not totalizing. They did not have the same consequential power to awaken the concern of the whole intellectual community.)

The ancient distinction, we must not forget, did not concern any such situation or activity. The identity of the thing determined was concerned with saying what each item was to man as man, or the citizen of the community, with the aim of learning the right understanding of the thing. Not at all with the business of the scientist in the modern sense, who is concerned with finding out more and more information, thought as neutral fact. And then, derivatively, applying that that is learned to the life of the people in order to ease the human condition.

Husserl determines the Cartesian determination in the opposite direction, as does the scientific project and activity. Everything is thought by the doubt, without concern for truth. If all this is a lie, no matter, it is as it is. One, in the phenomenological vision, appeals to no reason. Only to the destiny, or to the history, of the inquiry. History, natural history, was in the beginning of philosophy, thought in opposition to natural philosophy. History meant true inquiry. I go look at something, I look at it right there as it stands before me, and describe what I see. That is true inquiry. Eventually this became what is now called life science, or biology. The description of living things, organisms, cells. If the life sciences are stripped of the Darwinian teleology they lose their sense entirely. They must have an understanding of the healthy and the unhealthy at all levels. The normal and the abnormal, the successful and the unsuccessful. But, in destinal history, there is not judgement. It can never be a science, except in the sense of making true descriptions. But the description is entirely devoid of a larger aim which would explain why it was worth doing. It is not for salvation, either in the secular sense of improving human life, through learning about, e.g., health and its reverse, or in any other sense.

In speaking of the screen, I only say what now occurs to me, without removing to a theory about what will always be. Knowledge is always understood as what is always true. Truth is what is true, and the truth is what always is. In Husserl's sense, the truth is only of the ground of grounds, in the possibility of observation of what now is.

The principle of identity is denied, or, better, it is not reached. One does not go so far as to require it. The law of thought called identity is a feature of philosophical logic, of Greek logic, produced in the specific project of the ancient Greeks. But it can’t be denied that it was guiding for over two thousand years, from the time of the first beginning. And in that sense it is there. It is there in the stronger sense of the fact of its part in the whole of the life of the, I say arbitrarily, Greek-American civilization (one could as readily say, Roman-German civilization). It is part of the past means the same thing as it is part of what is here now. Of what this world is. Something like this, whatever else is meant, is in Heidegger, when the text says,  we, the current world, are our history. The primary vagueness of the account is part of the determination of this thinking. This is what Heidegger says, when that text reads: the end of metaphysics. I.e., that text indicates, this world, this one, here, is the end of metaphysics.

Then, the end of metaphysics still involves reason. It should be noted that the main point, outside philosophy, that offers a contrast, is the received text. The one who has an experience not given to others, who receives the prophetic text, still uses reason to grasp the truth of the text. For instance in the case of a difficult passage, that requires interpretation, and authority differs, one wants to, through exegesis of some manner, get to the truth. The contrast between reason, and faith, for philosophy is not at issue. Philosophy accepts natural and divine reception of texts, but it is concerned with understanding those laws or texts. Human beings find what is received, intelligible. What is spoken of in the sense of reason, in the sense of reason simpliciter, is intelligibility or what is guiding for human beings as human beings. But, in the modern question of epistemology, what is in question is what is as such. Because rationality, unlike the higher notion of antiquity, when it becomes episteme, refers to the bare intelligibility of everything, a stone, the sky, smiling people, a difficult passage in Plato.

The epistemological question is the question of the historicist. That of pure reason. I.e., of bare intelligibility of the world. When what is behind the Kantian representation is dropped, the pure reason becomes being. And that means the thing in itself, the identity, is no longer a hypothesis. The work no longer places itself on the very substance of the truth. For there is not the eternal, or what always is, the true.

The great earthquake at Lisbon in 1755 can be understood as a fact, a natural fact. It is not brought about by nous. For nous is the human. It is brought about by nature which is understood as part of the whole, part of the god. The god, with its teleology, must have made that earthquake for some purpose connected to human beings and mainly to their behavior. In this sense the earthquake, is understood, as something in the world. It is a detail of the world that is the world of that god, who is concerned with human beings and their behaviour. It is not that, it must be noted, this is the chief thing, the earthquake was explained in order to say, what natural forces are at work, and then the wrong answer came back. That due to our wrong behaviour, wrong human behaviour, the earthquake happened. The attempt was not to explain the earthquake. Rather people concerned with the education of human beings to the right way of living, subordinated the fact of the earthquake, to themselves. Today the world sense wants to think the character of human beings unimportant. It attempts to subordinate human action to economic events. And it considers earthquakes as unedifying and of interest chiefly for specialists. Earthquakes are of no serious interest to human beings these days, they are simply natural, i.e., neutral events.


The question is not of the use of the object. That this object is used ‘as a computer’, it is of the object taken as a detail of a world, under the world animus, the objective subjective, in the way it has its excursus in passing and private human dealings. The object or thing can be used differently according to various authoritative prescriptions. At the same time things unnoticed by the public about the object might come evident to certain circles of the population. But the way in which this power struggle over what the thing is, and how it should be perceived, rests on the thinking of it by the world. The world understood as the end of metaphysics is increasingly the whole physical globe, since almost all leaders and therefore all significant policies, stem from ten or so universities. The transition into global identity, now in its last stage, means also the globalization of the destiney begun at Athens. And thus the end of metaphysics is what all infants, as they become truly human, grow into. Soon there will be only such beings.
Posted by epistemeratio at 11:24 AM